ASK THE EQUINIST: Trying to go Barefoot...What am I Doing Wrong?

May 26, 2011
QUESTION: I've been trying to transition my horse from being shod to going barefoot for over a year now, and I'm wondering if I should just give up. I have a professional barefoot trimmer coming every six weeks, she keeps the heels low and the toes short, says his angles are all at the measurements they should be, and she trims away excess sole to improve concavity. I soak the horse's feet for an hour every day, as she recommends. I'm trying to do everything right, but my horse keeps getting abscesses and seems more sore now than when I first took him out of shoes. I don't know what else to do and am thinking of putting his shoes back on. We never had these problems when he was shod, and I'm starting to believe that maybe he just can't go barefoot. I know you have a special interest in barefoot hoof care, so I would like to get your thoughts on this. Thank you.

ANSWER: I'm sorry you are having such difficulty, Lori, as you are obviously a diligent and caring horse owner. I hate to say this, but I think the problem may be the style of trimming and hoof care your trimmer was taught to do. Your story sounds eerily familiar, as I once knew a woman in a very similar situation to yours. She had two horses, both of the breed called the Canadian. She had a barefoot trimmer working on her horses, and both were abscessing regularly and so sore that she had not ridden either one much for two years when I met her. This was shocking to me, as Canadians are generally "gravel-crunching machines" with feet like tempered steel.

I asked her who her trimmer was, and when she told me, I immediately knew what the problem was: her trimmer, while a lovely person who truly meant well and believed she was doing the right things to help horses, had learned a very invasive style of trimming that has caused many, many people to give up on keeping their horses barefoot because, like you, they think their horses "just can't handle it". I begged this woman to consider trying a different trimmer, a good friend of mine whose methods would allow her horses to heal and develop as they should. She agreed, and when my friend took a look at her horses, she could barely contain her outrage when she saw what damage the previous trimmer had done.  Later, in private, she told me, "That damn trimmer took off so much live sole that the poor horses' coffin bones are nearly coming out the bottoms of their feet -- you can actually see the outline of the bone bulging through. It's no wonder they can barely walk!"

My friend explained to the owner that you should never remove live sole -- the horse needs this material for protection, and the thicker the better. When you thin this, you weaken the entire foot, leaving the horse extremely vulnerable to developing the kinds of cracks and bruises that so often lead to abscesses. She also pointed out that you cannot -- absolutely cannot -- create concavity by carving it out from the bottom. Concavity is something that develops naturally as the whole hoof capsule, interior and exterior, becomes tighter and healthier -- and even then it will only develop to the degree that is natural based on the shape of that horse's internal structures. She then made an analogy: "Let's say that for some reason, it was a good thing to be bow-legged, and you took a person with straight legs and tried to turn them into a bow-legged person by carving off their calf muscles. That person might look bow-legged, but the bones are still straight underneath. When you carve off live sole on a horse, you create an equally false appearance of concavity, but all you've done is weaken the sole." So, when you talk about your trimmer removing "excess sole", I am worried she may be removing live sole and actually causing your horse to be sore.

I will also tell you that Gene Ovnicek once told me that he feels trimmers who use such invasive methods should be put in jail for cruelty to animals. He then said, "I've literally held the bones of the horses they've maimed in my hands, when the bones have come through the bottom of the foot because of their continual carving away of the live sole. It's criminal."

Another problem may be the daily soaking you've been told to do. This practice is also taught by the same people who advocate removing live sole, and it is equally problematic. Pete Ramey once told me that the healthiest feet he had ever seen, hands down, belonged to a herd of horses on a ranch in Arizona -- and these horses got their feet wet maybe a couple of times a year when it rained. This started him thinking about external moisture and hooves, and over the years his observations have led him to conclude that external moisture is the enemy of a healthy hoof. Hard, dry, well-developed hooves tend to be the ones you most often see on the horses that float over rocks like they are not there -- and these horses are also not prone to thrush, abscesses, or many of the other problems that are far more rampant in moister climates.

I have personally recommended that people try to keep their horse's feet as dry as possible. I have seen no evidence whatsoever that soaking is necessary to keep the hoof "flexible", nor have I ever seen a horse that did better with daily soaking than it did without. Where I live now, it is very wet for a few months in the winter, then extremely dry for most of the spring, summer and fall. I have seen firsthand how my horses seem to laugh at the hard ground and rocks at the dryest, hottest times of year -- the longer it's been dry, the better they move on the ground that is at its most unforgiving. The research that has been done on moisture levels in horse's feet support the idea of keeping them as dry as possible. Data shows that the moisture necessary for proper flexibility of the hoof does not come from outside the hoof, but from the body itself. Moisture drawn in from the outside does nothing beneficial, but in fact weakens the integrity of the hoof material, causing a variety of problems. If you want to read a more thorough explanation of this, see the article "Managing Wet Feet" at thehorse.com:

So, to make a long story a bit shorter, I would really encourage you to ask around for another trimmer, and to stop soaking your horse's feet. The moisture will only encourage cracking and bacteria -- and thus the continual abscessing. I would also recommend that you check out Pete Ramey's website: hoofrehab.com , and read up on how to use hoof boots to help your horse transition to barefoot.

The last thing I would like to say is that these "angles" your trimmer talks about are not necessarily what your horse needs. Dr. Bowker of the Michigan State Hoof Lab says that there is a natural variability in these angles, and that trying to force every foot to conform to some preconceived ideal is a mistake.

Please keep in mind that there are widely varying opinions out there on how to trim and care for a barefoot horse, and what I've said here is just my own. However, as I said to the lady with the Canadians, "While a fool will keep banging his head against the wall in an attempt to go through it, a wise man moves on to a different spot and eventually finds the door."

Oh, and just to let you know: under the care of my friend (no trimming of the live sole, no soaking), the two Canadians became sound almost immediately and never had another abscess. They are now both the "gravel-crunching machines" they should have been all along, and the owner literally wept in my arms, as she felt so guilty that she had "tortured" her horses for those two years by using that other trimmer. I told her not to blame herself -- she simply didn't know any better, but now she does.

Popular posts from this blog

No Perfect Horse: Three Knee Problems As we mentioned in the last installment in this series, the knee of the horse is a complex structure that is subject to a great variety of conformation faults. Today we’ll take a look at three knee deviations, all of which are best observed from a lateral (side) view. Back at the Knee (aka calf or sheep knee) This is a serious fault in which there is a slight to marked ‘bowing’ backwards of the leg from a lateral view. A plumb line would fall closer to the front of the knee and further behind the heel bulb. This puts similar strain on the limb as if the horse were continually traveling downhill. Such conformation can put excess strain on various parts of the limb, including the flexor tendons, inferior check ligament, and suspensory ligament.  Horses with this fault may not move well and may be prone to stumbling, as well as bone chips in the knees and soft-tissue injuries such as bowed tendons. Working these horses in deep footing
Read more 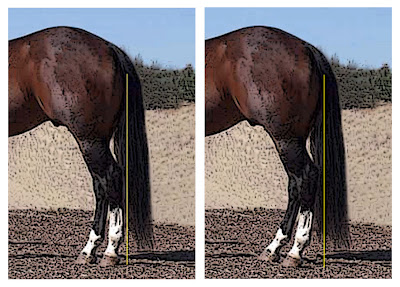 For this installment of our new series on conformation faults, we spoke to Charles Hutton, PhD, an instructor in breeding management at Murray State University in Kentucky, and owner of Nu Chex To Cash, an NRHA Million Dollar Sire, Multiple World Champion and World Champion Sire. Dr. Hutton has a particular interest in applied equine genetics and conformation.             Small hock angles, also known as sickle hocks, is a conformation fault in which the point of the hock lines up under the buttock correctly, but the canon bone angles forward so that the horse is standing under from the hock down. In profile, the leg appears to curve forward, giving it some resemblance to a sickle. This conformation places the plantar (rear) aspect of the hock under great stress, predisposing the horse to sprain and strain of the soft tissue structures that support the back part of the hock. Most experts agree that any horse with hock angles of less than 53 degrees is sickle-hocked. On t
Read more 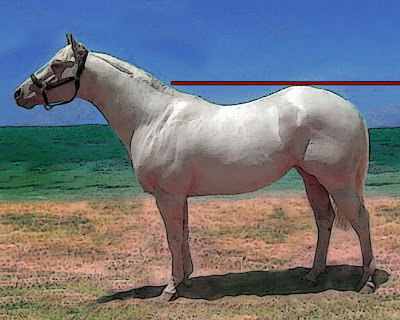 Downhill Balance: The Bottom Line on the Topline This horse demonstrates downhill conformation, which can appear in any breed, but which is particularly common among the stock horse breeds.              Many growing horses, especially those in the stock horse breeds, go through phases where the top of the croup is taller than the highest point of the withers. In many cases, the front end eventually catches up, but when this build persists into adulthood, it is generally considered a conformation fault. Variously termed as being “downhill”, “bum high” or having “downhill balance”, such horses are said to be more prone to front end lameness and back problems, as well as to have more difficulty performing athletic endeavors.   However, there is little in the way of scientific evidence to support the assertion of increased lameness risk, and some argue that downhill balance is not a fault at all.   There is even the perception in some circles that downhill balance can be an advantage,
Read more